Hey, DanM, guess what. It’s gonna be a time travel movie. Seriously. Should I go ahead and reserve your seat?

A MIB III movie involving time travel? Really? With an infinite universe filled with infinite possibilities that’s the best they can come up with…time travel? Oh well, I guess it can’t be any worse than MIB II.

Dan, I knew you’d be pleased 🙂

Ok, some comments on the comments:

Evangeline needs to understand that any deviation from the books is gonna make a certain percentage of people whine like assholes. And I’m not just defending her character’s inclusion because I am absolutely in love with her. Not just. I love The Hobbit. I think it’s a MUCH better book than Fellowship, which is as far as I’ve gotten in LOTR. But it comes down to this: taken as written, any direct/literal translation of Tolkien to film would be virtually unwatchable. Just hours upon hours of dull, emotionless shit. Tolkien was creating a world with words, which is great, but that means a word for word recreation on film would include a LOT of horribly unnecessary dialogue, and, since it’s Tolkien we’re talking about, singing. It would pretty much be a fucking 12 hour musical. A really, really bad one. I have no problem with a film creating composite characters like pretty much every well made “based on a true story” film does. Any given person’s life has a cast of hundreds or thousands, just like Tolkien’s stories. Sometimes, if you want to make a tight film, you have to eliminate a lot of unnecessary people and combine a few key characters into one. Sometimes in order to have a story at all, you just have to fucking make people up. If they can do it in “true stories” and still legally call them “true stories,” then what’s the big fucking deal about doing it with Tolkien?

Avatar sequels? No thanks. I saw enough overhyped blue cat people the first time. It was a B+ movie. We should all agree to stop pretending like it was a gamechanger.

Ghostbusters III? Sony, fucking do or shut it down. Just don’t fucking toy with me anymore. It breaks my heart to much to be strung along like this.

No Ash in the Evil Dead remake? That’s actually not a bad idea. No one would ever be happy with a replacement for Bruce Campbell, so leaving Ash out seems like it may be a smart move. I’m curious to see where they’ll go with this.

You know what? Who fucking cares if J.J. Abrams directs the Trek sequel? It really doesn’t require him. They’ve got a great cast, all they need is a solid script. With those two things in place, there are a ton of great directors out there that could knock this out of the park. If Abrams doesn’t step up to the plate, put the next guy in. He’s not the only fucking director in town. Fuck his ego tripping delay tactics. He’s not all that great. Get Nicholas Meyer to do it. He’s directed the two best movies of the franchise. He completed the final script rewrite for Wrath Of Khan in 12 days without ever having seen an episode of the series. The dude has the chops. Give it to him.

More Indy films? No thanks. That’s been ruined for me. And everybody needs to get the fuck over Blu-Ray releases. Studios are pumping out 4 or 5 DVD/Blu-Ray “editions” of every goddamn film in hopes of selling multiple copies of the same shit. If you saw there was a new book coming out, would you accept a publisher releasing five different versions, some with “deleted” chapters, some with whole new plots written into the story, and some with all the same content, but printed on special, high clarity Blu-Paper as opposed to the other normal paper books? Would you get all five copies and read each one just so you didn’t miss something? I wouldn’t. I’d tell the publisher to fuck off. Vote with your dollars, people. The vast majority of movies aren’t that important. In fact, they’re disposable entertainment. Don’t pay much for them. It’s a waste of cash.

Just watched a Russian bootleg of Rise Of The Planet Of The Apes. LOVED IT.

Last edited 2 years ago by chris
0

Regarding The Caves of Steel: “humans have grown increasingly paranoid of… robots who perform slave labor on outer planets… a detective pairs up with a robot disguised as a human to solve the crime.”

Haven’t I seen this? Wasn’t it called Blade Runner?

And a sequel to The Shining? With vampires? Fucking really? I’m so afraid this is going to be a George Lucas returns to the well scenario. Should we, as a group, have a serious discussion about taking Stephen King out before he does any real damage? We’ll have to discuss the time and place to kill him. And a murder weapon. No vans, obviously, since he seems to survive those.

No, in Blade Runner it was only a robot disguised as a human that solved the crimes. Completely different premise 😉

As for vampires being added to The Shining sequel, sounds like pure market pandering to me. Wasn’t “The Tribe” the title of the sequel to the Lost Boys movie?

Maybe I should jump on the bandwagon and write a book about vampires too…. 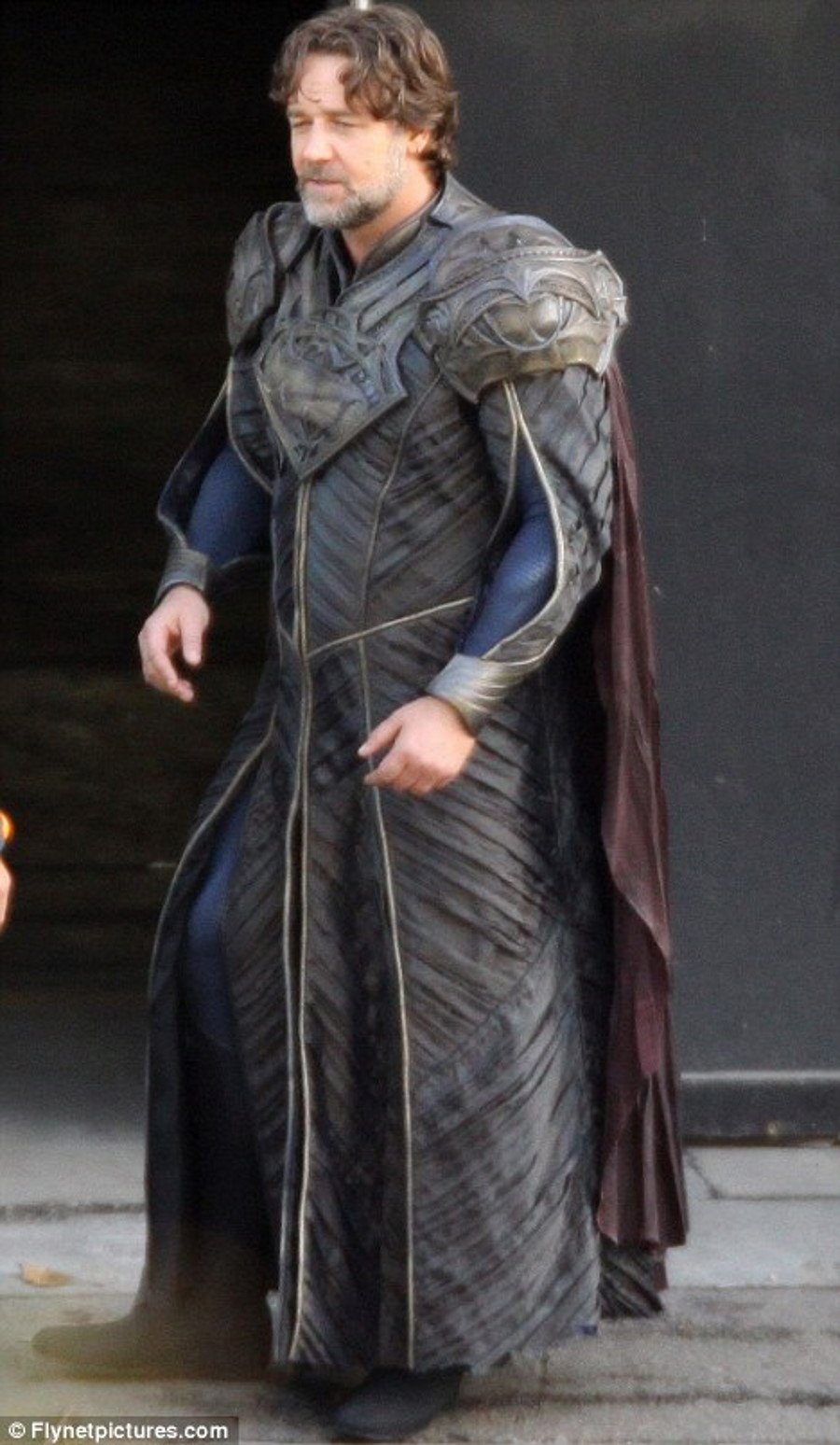 Hated the new Kryptonian duds at first, but now that I’m seeing all the nods to what will eventually become Superman’s classic costume, I’m becoming okay with it. Still a bit too Lord Of The Rings-ish, but I can cope.

I have very little hope for the new Superman movie.

I’m actually surprised to hear you say that, Dan. I know how much you like Smallville, and this so far has had a very Smallville feel about it to me. It seems like it may be taking some cues from that series, which, after having run for 10 seasons, seems like a pretty smart move. I would have thought you’d be more interested.

Speaking of DC Comics related TV shows, why the hell does DC even bother with movies? Their TV shows are SO much more successful. Smallville had a 10 season run, people are still going on about the Aquaman pilot episode, the DC Animated Universe stuff has been so successful on the air and in direct to video that the comics have adapted some of the storylines and characters into the mainstream DC continuity (or what’s left of it), and Batman: The Animated Series pretty much set the standard for dark superhero storytelling on television. Why waste millions on what could be a flop when you could literally spend YEARS telling amazing stories on television for the same money, and then make two to five times as much on DVD sales? I don’t get it.

20th Century Fox has signed on Andy Serkis to reprise his mo-cap role of the lead ape Caesar in at least one sequel to this Summer’s sci-fi hit Rise of the Planet of the Apes.

Serkis had only signed on for one movie and the deal reportedly ensures he’ll be back for multiple future installments. Both director Rupert Wyatt and screenwriters Rick Jaffa and Amanda Silver’s original deal had sequel options which have been picked up.

Peter Chernin and Dylan Clark will produce but things are still in very early stages and it’s unsure if other cast members will be back. The studio also intends to wage an Oscar campaign for Serkis’ work in Apes. Serkis has also delivered an acclaimed mo-cap performance in The Adventures of Tintin opening at Xmas in the United States.

I LOVED the new Apes movie. I eagerly await the next one. Because of the original franchise, I’ve always seen The Planet Of The Apes as a series. It’s something that almost needs four or five movies and maybe a TV show. And I’m okay with it losing some of it’s quality, as long as it stays entertaining. Some sci-fi is best left small, but I’m cool with The Planet Of The Apes being a sprawling, epic, and sometimes questionable saga. I don’t mind if these turn into B-movies. B-movies are what the Planet Of The Apes franchise is to me, and I’m totally cool with it. I say bring ‘em on.

Last edited 2 years ago by chris
0