The Q is in effect! Ho-ah, let’s get up to date on some Sci-Fi movie news.   While there are other movies that I’m more interested in telling you guys about, by my contract with Chris (written in the blood of virgins, which I’m sure you can guess costs a lot) the first movie news bit I have for you is the old Sci-Fi standard, Star Trek.  According to TrekMovie, it turns out that STXI is planned for Summer 2008 and things are coming along nicely for the flick.  I cannot help but think that things are going to go very sour for them though – you know that it’s about the original series characters, right?

“Still unclear how many TOS roles are being recast, but another source indicates that the treatment included the characters of McCoy and Scotty in addition to Kirk and Spock. The ‘Kirk’s first Mission’ plotline still seems to be the prevailing assumption amongst those TrekMovie has spoken to, but still nothing firm so it is still in the realm of ‘rumor’.”

I may not have a full handle on this, so let me make sure I’ve got this right.  It’s got first gen characters, all together, so I can only assume that we’re talking about the maiden voyages of the Enterprise – I mean, I just did a quick check, Kirk was the first captain of the Enterprise (ignoring all that alternate timeline crap), and surely it was in that role as captain of the Enterprise that he met McCoy and Scotty and Spock. Please GOD don’t tell me he’s that we’re going to get the Dickens/Lucas treatment and have Kirk rescue a young Vulcan with the help of a recently graduated family practitioner only to be trapped by whatever and then saved at the last minute by the ingenious and clever gadgetry and ingenuity of an aspiring engineer.  Christ in heaven, please, not that.

Also, I suppose this would be Sci-Fi, but since it’s related to a game it might, I dunno, be misplaced?  Screw it, I think that Halo is science fiction, and I’m the only person I need to answer to!  The Halo movie is serious trouble via Variety, but Peter Jackson says that everything’s A-OK!

Probably not Sci-Fi, but: Wanna get your Fraggle Rock on in a feature film?  You betchya.

Q, I love ya, man, but you’re killing me. I’m poppin’ a fucking brain vessel over here.

First, the love: yes, you’re absolutely right, Halo is clearly sci-fi. Almost all of the best video games ever have been sci-fi or fantasy. Good call. And yes, it is pretty much understood that Bones came on later. He wasn’t even in the first episode with Kirk; a different doctor was.

Now I will show you how you’ve killed little pieces of my soul. First of all, wherever you checked was apparently the world’s shittiest Trek resource. Kirk was NOT the first captain of the Enterprise, he was the third. The first captain was Robert April, whom the movies and series tell us nothing about… or at least nothing that I recall. The second captain was Christopher Pike, whom was the captain of the Enterprise for 13 years. In the original series we see him twice.

Sometime early on during Pike’s 13 year command, Spock came on board as a science officer (he did not serve as first officer at this time), and we learn that Spock was on the Enterprise at least 11 years before Kirk. This was also long before Spock achieved mastery over the emotions of his human half, and in Star Trek’s pilot episode “The Cage” we see Spock reacting emotionally several times in Captain Pike’s presence.

Spock and Captain Pike became very good friends. Captain Pike eventually left the Enterprise, was promoted to Fleet Captain, and took over training duties for new Starfleet personnel. During a routine training mission, his J-class training ship’s warp drive baffle plate ruptured, resulting in Pike being horribly disfigured by delta radiation poisoning. This resulted in extensive, incurable scarring, loss of speech, and almost complete paralysis. Spock hijacked the Enterprise from Captain Kirk in order to free his friend and former captain from a lifetime of suffering and immobility in the episode “The Menagerie.” Captain Pike’s historical importance is verified in other Trek series. In Star Trek: The Next Generation we find out that the Enterprise-D has a shuttlecraft named Pike. In Deep Space Nine we see Captain Benjamin Sisko being awarded Starfleet’s Christopher Pike Medal Of Valor, and we learn that there is a Pike City on Cestus III, the same planet from which Kirk was kidnapped to fight the Gorn in “Arena.”

We never learn how Kirk gets command of the Enterprise. I hope the movie shows us. I also hope Christopher Pike is in the movie, and I hope like hell they finally explain something, anything, about Captain Robert April. I further hope that a team of beautiful, goth, submissive latex model Suicide Girls with perfect bodies and no gag reflexes are waiting for me in my bedroom at home, desperately longing to fulfill my every depraved sexual whim. I’ve listed my hopes in this paragraph in order of decreasing likelihood.

So what about Jonathan Archer? Sure, it wasn’t an NCC class starship, but it was still called Enterprise. Would he have been before April?

And as soon as I clicked “Submit Comment”, I realize that of course he would be before April. Archer was the captain of the first warp 5 starship, Enterprise. That had to have been before April.

How come I never heard of Robert April before? Was he mentioned in the first couple of episodes of TOS?

I should clarify: I meant the first captain of the Enterprise as in the specific ship from the original series, NCC-1701. Its captaincy, or at least what we’ve been shown so far, was as follows; Robert April, Christopher Pike, James T. Kirk, Matthew Decker, Spock, then James T. Kirk again. After that, the Enterprise was scheduled to be decommissioned, but Kirk stole it and blew it up over the Genesis planet in The Search For Spock, so he was the last captain of that particular vessel. 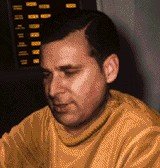 Capt. Robert April is in the episode “The Counter-Clock Incident” of the animated series. “Robert April” was one of the many names Gene Roddenberry came up with for the captain of the USS Enterprise (which was originally to be named ‘S.S. Yorktown’). Only Christopher Pike and James T. Kirk were ever mentioned in the original series. A few years later on the animated series it was established that Robert April came first, then Pike, then Kirk. April’s bio on StarTrek.com would seem to confirm that this is now considered canon. The pic of April above is from The Star Trek Encyclopedia, and is just Gene Roddenberry’s head Photoshopped onto someone else’s body. The way April appeared in the animated series is below. 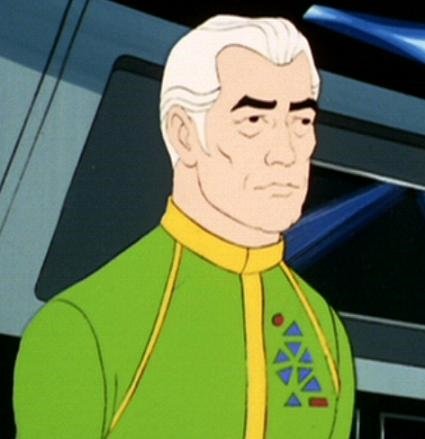 Interesting trivia: Unused material for Jonathan Archer’s bio in the Enterprise episode “In a Mirror, Darkly, Part II” stated that Archer passed away in 2245, one day after the christening of the USS Enterprise NCC-1701. If this is true, April and Archer might have met, Archer might have seen or been aboard the NCC-1701, and may have even been present at launch ceremony.

Discovery finally made Robert April canon by including his name in a live action episode. Cool to see a shout out to Matt Decker in there as well.